Mark Beaumont‘s Twitter tagline reads; “Adventurer, author, expedition cameraman, speaker.” I think he should add marketing genius to that one. His latest talk took place Thursday night at the Royal College of Physicians, Edinburgh.  The selling point, ‘come to my talk, buy my book at the door for a reduced rate and I will sign it for you.’ Cheeky. But who am I to judge, I was the first in the queue and now I hold in my possession an autographed copy which the legend held and signed with a pen. By the end of the evening the queue was so long, it could have been a Justin Bieber concert, except on this occasion it was middle-aged men and women doing the blushing and giggling as opposed to 14-year-old girls.

Mark has circled the globe, all 18,000 miles of it and in a Guinness World Record speed.And oh boy, that makes for a good talk. It was a breath of fresh air in a host of talks that were becoming too similar in their tactics. Mr. Beaumont took a different, less explored root. Fitting for him I suppose. He talked about the reality, the pain and hardship involved and the before part that no one ever gets to hear.

In truth, it was hard work. The expedition took two years to plan to perfection, then it took another year and a half to convince the media and the sponsors that he could actually pull it off. He admitted quiet a scary truth; in order to keep going during feats like this, your whole mind-set must change, after years of being told this is the way you have to think, now in order to succeed you must get completely lost in the here and now. However if this works, “It is a wonderful feeling.”

He talked of the importance of documenting the experience. The storytelling reminded him to enjoy it, to value it. Without that aspect he questions if he would have made it. He  scaled the vastness of the trip back and showed us its bones, the everyday problems and what he learned. In Iran for instance, the truth is very far off from how the media has painted it. It is simply a communication problem, both sides mistrust the other side. The Iranian cycling Federation even joined him for a pedal. His life was stripped down to a very black and white status. Survive. If he could find the basics each day; enough food to ease his 6,000 calorie a day requirement and a safe place to sleep, then all was well.

Then, somehow, quite astonishingly he made it home. He crossed the finish line like a Tour de France winner by the Arc de Triomphe. He had lived out his dream. 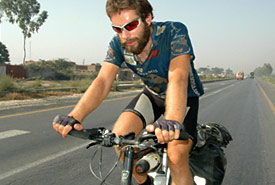 Now, you want to know the good stuff, the facts that made this achievable. Mark Beaumont trained at a far higher intensity before the trip then when he was actually on route. He combined cross training with sprints. When he finished the race, he had no perspective, it took him three weeks to float down and absorb his achievement. He says; “You prepare yourself to go, you don’t prepare yourself to come back.” With regards to packing, if you don’t use an item for two weeks, send it home. He used a  Koga Miyata bike, and installed disc brakes as opposed to rear brakes to make the tyres last longer. When asked during the Q&A session  if he listened to music, his response was that the music’s beat punctuates time, to succeed you need to zone out, but music will keep bringing you back. So music was a luxury to be used sparingly.

A person has already broken his record but he will not endure it again. “There so much other stuff to be done”, spoken like a true adventurer.

The lecture was hosted by the World Cycle Challenge; “the only fully supported cycle around the world.” There is no need for me to sell it to you, it sells itself, 8 stages, 18,000 miles, 20 countries, 9 months, 24/7 support team and one life changing experience. Are you dancing on the spot right now, getting sweaty with excitement? I am afraid I will have to ever so cruelly kick you now while your guard is down. It will cost you, £34,000.

The redeeming factor is you can do a stage of it:

So far nine people are signed up. In his attempt to put the cost in perspective. Mark’s unsupported round the world trip cost the bones of £24,000 and it costs more, apparently to climb Mount Everest.

So are you in?