1.By the looks of it, you were made to be a tri-athlete.  How did you get into it?

I’m not sure if I was made to be a triathlete but I am very pleased that I got into the sport.  You could say it was life changing!  I’m originally from a swimming background.  I swam through my high school years and reached a national level although I never was good enough to make the national junior teams.  At 17 I’d lost my love for racing so I quit although I stayed active:  swimming a bit, running and going to the gym.

At university I got back into swimming: this time on a more social basis and then when I started working for Taylor Wessing in London I joined up with the Otters Master SC.  By then I’d definitely got my love of racing back but I was tiring of the black line of the swimming pool.  I ran the London Marathon, and then bought a bike…triathlon was the natural next step!  I swam with a few guys who did triathlon and did the longer half ironman distances.  I decided that was my challenge: to complete a half ironman.  At that time an Ironman seemed way too daunting!

2. You have just moved teams, who is your new team?

Yes, after two good years with the Abu Dhabi Tri Team this year I have decided to go solo, although that’s not really an accurate description as I am supported by a host of fantastic sponsors and by my friends and family, who have been a rock since I decided to race triathlon full-time.

This year I am very happy to announce that I will be working with Cervelo –I rode the P3 last year so I am stoked to make it official this year. The new P5 just looks AWESOME!  I cannot wait to ride it.  I have also joined up with Newton Running Shoes too: and had a good start with them at the Abu Dhabi Triathlon where I took the run course record.

I have also started working with the Biestmilch crew.  Biestmilch is a colostrums product which I take daily to help maintain a healthy immune system: super important when you are training and racing hard.  Also, I am continuing to work with PowerBar, Aquasphere, ISM saddles, XLAb and SRM.

3.What is going through your mind while you are racing?

A whole lot of things! I stay focused on keeping my pace up, I make sure that I am eating and drinking enough, I talk to myself to make sure I keep a positive mindset (well, I try to!)…sometimes I sing to myself.  It’s a long day so lots of things go through my head.

4.Do you have a goal that you are working towards, a certain number of races, a certain race…?

Kona is my main focus in the year, and then I have a couple of other A races – so this year that’s Ironman Melbourne and Challenge Roth. I am also doing a few 70.3 (Florida in May, Kansas in June and Timberman in August) and while I want to perform well in these races, they are not A races but building blocks to hopefully help me peak for my A races.

5.What does your weekly training schedule consist of?

I usually swim 5 or 6 times, ride 5 times and run about 5 times a week.  For each discipline I look to include an endurance session, plus a speed and strength session.  A typical week is anything from 20-25 hours week: sometimes less sometimes more.

6.What injuries have you received in the course of your racing career?

When I first got into the sport I struggled a lot with a persistent back injury.  I have a damaged disc or two which caused me sciatica problems that were hard to shake.  Now it is a case of managing the issue.

I think it is the nature of triathlon that most people get injured at some point, so of course I’ve had other niggles. I guess the main injury in recent years was during the Abu Dhabi Triathlon in 2010.  I cut my foot open in T1 on the chain ring of my bike and lacerated three tendons.  I spent 6 weeks in a cast and it took a lot of work to get back to racing but the year ended on a high when I finished 5th in Kona.

7.What is the appeal of the race, of combining the three elements?

For me I love pushing myself and seeing what I can achieve.  I’m driven by trying to get the best out of myself.  I don’t think I’m there yet so I’m sticking at it!

8.What is your favourite moment in a race?

Running down the finishing chute for sure!

9.After all those years, do you still get a thrill out of it?

Yes I do.  In fact the sport still feels new to me which I guess is a good sign.  I really do still love the training and the racing.

10.How do you balance a career in law, your sport and having a social life?

I resigned from my job as a lawyer back at the end of 2008, which makes it much easier!  Social life…well, I don’t see some of my friends as much as I’d like but I make sure I stay in touch. I joke with my sister that she has to tell me about her social life so I can live vicariously through her when I’m on training camp! Luckily the internet and Skype makes that much easier!  I’ve also made some great new friends from doing the sport so I count myself lucky in that respect.

11. To be honest law and triathlons sound like polar opposites, how is it you love both?

They are quite different that’s for sure but there are overlaps.  I liked law for the mental challenge and the problem solving aspects.  It sounds nerdy but figuring out how to put together a contract to achieve a client’s requirements was quite satisfying.  Triathlon is a different type of challenge, but people make the mistake of thinking it’s just physical.  It’s not.  There’s a huge mental aspect to training and racing.  Like in law, in triathlon there are times when you are put under pressure and you have to keep your cool and think your way through a problem/issue.

13.How do you think the women’s field is progressing in this sport, Is it as popular as the men’s or at least is it growing?

I do think it is progressing at every level:  elite and age group.  I think that we will see women’s participation in triathlon continue to increase in the years to come which is fantastic. Sure men outnumber women at the moment but the gap will close.

One of the reasons I was so disappointed that the WTC limited the women’s field to 30 at Kona, versus 50 for the men was because I think this sends out the wrong message.  I believe it is in everyone’s interest to increase the participation of women in the sport and I think that an example should be set at the pro level to promote changes within the age groups and children getting into the sport. 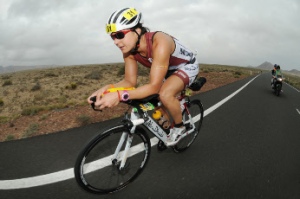 I usually hang out for a little while at the finish line to chat to other finishers, then it’s drug testing if I’m picked, then food, hydration and shower…after which I’ll wrestle to put my Compressport Full Legs on.  I love to go back to the finish line of an Ironman and see the final finishers….the atmosphere is incredible.

15.Have you tried other sports?

As a kid I tried every sport and I remain interested in lots of sport although I don’t participate in as many as I used to.  I have already lined up a whole bunch of sports I’ll do when I hang up my racing boots:  get back to skiing, play tennis, climbing, surfing…I’ll have a go at most sports and love being outdoors.

16. Do you think there is an end point to improvement, a limit on how far your body can go?

Every person has a limit to what they can do but I think in reality very few people ever actually reach that limit and the limit is higher than they believe.

17.How do you think the sport is developing in Britain?

I really think it is flourishing on all levels.  There are so many clubs springing up so the sport is becoming more accessible…although it is obviously not a cheap sport to get into.  At the elite level things look healthy too:  the Brownlee’s, Helen Jenkins, Chrissie and lots of depth behind them.

Pretty healthy overall I’d say.  I focus on lots of fresh fruit and vegetables plus high quality proteins such as chicken and fish. I also try to limit the processed foods I eat although I do have a weakness for good bread which I try to keep under control! I like to indulge in a good steak one a week. There are certain things you’ll always find in my fridge or store cupboard:  yoghurt, almond butter, oats and there’s always some dark chocolate knocking about!

19.Do you prefer racing in extreme heat or cold?

Heat any day.  Despite being from the UK I don’t like the cold at all.

It may surprise people to know that I only have one current race suit!

Galway 70.3 was such a fun event.  I didn’t have a particularly good race and conditions were *savage* (I think that’s how the locals described it 😉 ) but the atmosphere was brilliant.  The community was so welcoming and friendly and the town really had embraced the event….the after race shindig was also very good but I guess you would expect that!

22. Who is your main competition?

There are so many fast women out there that I couldn’t list them all.  I think we have seen a “Chrissie” effect over the last few years.  The women’s field has improved so much both in terms of depth and with faster times.  The obvious names are Mirinda Carfrae, Caroline Steffan, Julie Dibens, Leanda Cave, Catriona Morrison, Jodie Swallow, Mellissa Rollison…I just can’t list everyone – there’s too many!

One thought on “Interview with Rachel Joyce – Professional Triathlete”