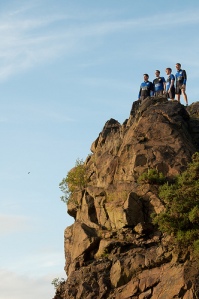 A young man once said; “You only ever grow as a human being if you’re outside your comfort zone.” This learned man’s name is Stuart Doyle and this particular man practises what he preaches. He and three of his mates have just dribbled a £3 Sondico football 300 miles from John O’Groats to Hampden Park in Glasgow.

One ball controlled by four Scottish men; Andrew Milne, Chris Strother, Mark Graham and Stuart Doyle. Each taking it in turns for 15 minute shifts they successfully guided the ball across the beaches of Brora over the West Highland Way and through Clyde Valley to arrive at their final destination.

The distance plus time limit covered in this challenge is equivalent to running twelve marathons in ten days. A feat that requires serious training and a fondness for pain; “We have trained off road a lot and tried to replicate most of the route conditions we will encounter along the way so we are prepared. I have also incorporated a mix of cross training like football, swimming, strength conditioning, mobility and flexibility stretching;” says 29 year old Doyle.

Like all true adventurers, the boys are camping. Before they embarked on the challenge, Doyle explained why they made this decision; “We will be wild camping each night as this gives us the most flexibility whilst also the most manly feeling! We are all outdoorsy guys so camping isn’t an issue, the midges might be however. But the reality is we will be out in the middle of nowhere so camping is our only option most nights!”

And like all good boys, they have undertaken this task not for themselves but for a charity; Tartan Army Children’s Charity. A charity which supports disadvantaged children in Scotland. “It was an easy choice, they are a great charity doing wonderful things and have given us their full support,” says Doyle.

The scale of this challenge meant the four would suffer. The pain and the injuries in what has been coined “endurance dribbling” was an ever present worry. Stuart Doyle endured the miles with swollen feet and a dodgy knee, while Mark Graham struggled with inflamed tendons. However another fear outweighed their ailments; “I think the fear of not doing it is the key,” was posted on the Jog4Hampden Twitter page.

They ran for ten days straight, directions courtesy of a detailed map and several iPhone’s. They roll into the national stadium in Hampden on the 8th of September in time to support Scotland as they kick off their World Cup qualifying campaign.

Doyle’s parting lines were; “Maybe we will start the urban dribbling craze that may sweep the nation in 2013.” People can give to the cause on their Just Giving page: http://www.justgiving.com/jog4hampden. You can also text to donate by texting JOGG67, followed by your chosen amount to 70070.