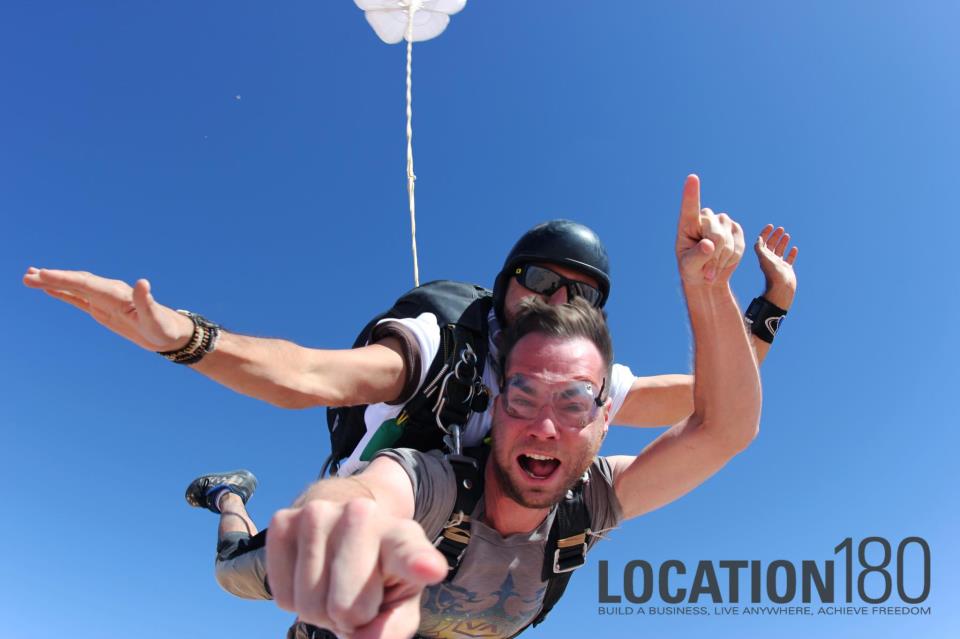 Ogle quit his job as a financial analyst and published his bucket list which he began to live by. He quickly realized just how attainable his dream lifestyle was and now while self supporting himself, he is truly living the dream. 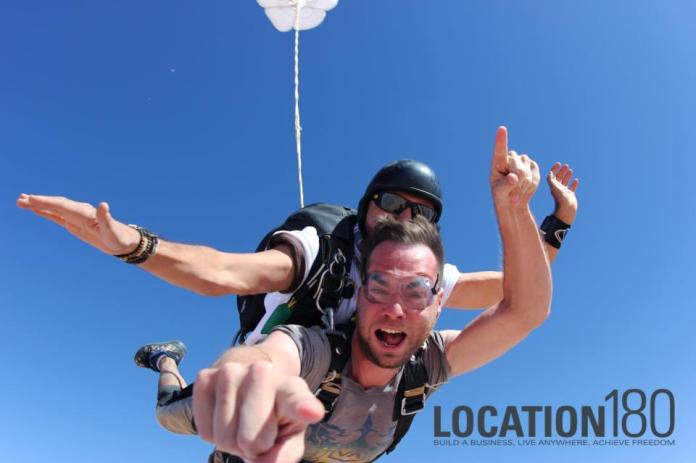 1.What skills do you need to be successful in real life?

Frankly, I think these days in order to be successful in “real life” you need to have skills that will allow you to be successful on the internet – since so much of our real life is consumed by it.

However, copywriting is essential.  You have to be able to sell yourself, ideas, and services in one form or another if you want to be successful – at least that’s been the case in my experience.

Location 180 is my primary blog/brand.  It began in May of 2009 because I wanted my life to make a 180 degree turn in the direction it was heading.

3. What is Location Rebel?

Location Rebel is my flagship course and community.  It’s where I’ve helped dozens of people over the last year quit their jobs, and build businesses that they can run from anywhere on earth.

4.Was fear ever a factor in starting off your new life? If so how did you get over it?

It took me 18 months to work up the nerve to talk to my boss about making a change.  I got over it by realizing if I don’t do it now, I never will.  I had the negative economy on my side in that regard.  Had I waited until the economy was more stable and certain, it would have just made it that much harder to leave due to the increased comfort.

5.Do you still have bad days nowadays?

Of course, we all do! However, on my bad days I have the luxury of saying, “ I’m not going to work today” or being able to go golf or do something else fun that will generally turn my day around.

6.Are you still in contact with the people you worked with in your old job, what do they think of all this?

I haven’t spoken with my old employer basically since I left.  There were some really hard feelings surrounding the whole situation. At some point I’d love to buy them all beer and bury the hatchet.

7. “And while sure, this is great for today, there is a very fine line between being free and being the lazy ass who sits on their couch all day watching reruns of Saved by the Bell.  That is my biggest fear at the moment.  My life is in my hands now. If I don’t go out and make things happen, they won’t, simple as that.”

Love this but how do you make sure this doesn’t happen?

Every single day I remind myself how lucky I am.  I take nothing for granted, and I know if I slack off, it can go away in an instant.

It’s constant awareness that helps make sure that doesn’t happen. 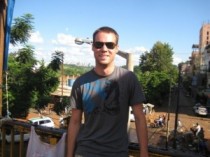 8.How much planning did you have to do before you departed for Thailand?

Very little, ha.  I got a plane ticket, and that was about it.  It was an adventure, and I was along for the ride. I thought I’d be in Bangkok for a while – and less than 48 hours after arriving I was down in the islands where I’d spend the next month.

Planning is great, but sometimes you have to be willing to just go wherever the story leads you.

I sat down and thought about everything I’ve always wanted to do, but either never made time for, didn’t think I had the money for, or that I’d be disappointed not to experience at some point.

It’s actually an ongoing thing.  I have about 50 things to add to it, and some to take off as well.

The most important thing however, is not doing it all at once.  Write down a few things when you’re inspired, and then come back when you get inspired again – don’t force it.

10.Which task do you think will be the hardest to complete?

I’m pretty sure that flying on Virgin Galactic will be next to impossible – however, I’m going to try my hardest!

11.What’s the minimum solo travellers can live on per day?

It’s totally dependent on your level of comfort, as well as where you are.  A solo traveller in Bangkok can survive on much less than say someone in Barcelona.  However when I was in Thailand (and Bali as well), my monthly expenses all in were under $1k a month.

Live a life worth writing about.

13.Is there a common theme arising in your most popular posts aka what do people most want to know about?

People seem very intrigued anything related to starting a small business on the side.  It’s one of those things that so many people say they want to do, but few actually know where to get started.  So if I can give them a good, solid starting point, it helps them out tremendously.

I’m taking the next two months to completely revamp Location Rebel and update everything about it.  Then after new years it’s probably off on another adventure. 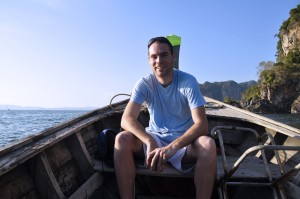 I don’t think I have a passion specifically.  I have a lot of interests, but I don’t know that there’s one thing that I can look at and say “that’s the one.”  However, helping people achieve their lifestyle goals is definitely up there.  The more I do that, and the more success I have with it, the more I realize how much I enjoy it.

16. Why do you want to help others achieve their goals?

Because there were people out there who helped me achieve mine, and I want to give back.  I also know how much more there is to life than what most people are experiencing, and for those that want to see what else is out there, I recognize I’m in a good place to help.

17.”What’s your craft? Are focused on the craft or are you getting lost in the form? What’s the best story you’ve got right now? Are you happy with that?”

Great advice….How often do you ask yourselves these questions?

Often, here’s my general thoughts on that:

The form is always evolving.  You have to focus on the craft.  The craft I’m working on honing is that of storytelling – in whatever form that takes.  It could be on a sales page, or with someone I’ve just met at a bar.  It could be via a blog post, or on a webinar.  The form is fluid, but if I master the craft of story telling, not only will I be successful, but I’ll help others be successful as well.

So I’m often asking is what I’m doing right now helping me to hone my skills of my craft.

18.How did you become so confident in your ability?

Lots of practice, and failure.  When you can fail, and you pick yourself back up and learn from it, you gain a form of confidence that can only be achieved via the failure. Not everything I’ve done has worked, but I know that if I keep persevering good things will happen – and I have to be confident in that, otherwise things go downhill quickly.

19. Do you think everyone can lead this type of lifestyle, or is it necessary for most to live the more traditional life in order to sustain the few who live as you do?

I think anyone can, but not everyone.  Most people are hard-wired to enjoy their traditional life and the security that comes with that.

It takes a large reframe and mindset shift to get the point where you think about seriously living out this lifestyle.  Anyone can do it, but most won’t.

One thought on “Interview with @seanogle”