“There can be no place more desolate, despairing and awful.” – Lord Kennet (1971)

Last summer Nick Hancock landed on an isolated rock in the North Atlantic Ocean in pursuit of two records, the longest solo occupation of Rockall and the longest occupation of Rockall in history, after 45 days in solitude he achieved both, earning himself a nomination for Adventurer of the Year. I got the opportunity recently to discuss the incredible expedition with the man himself. 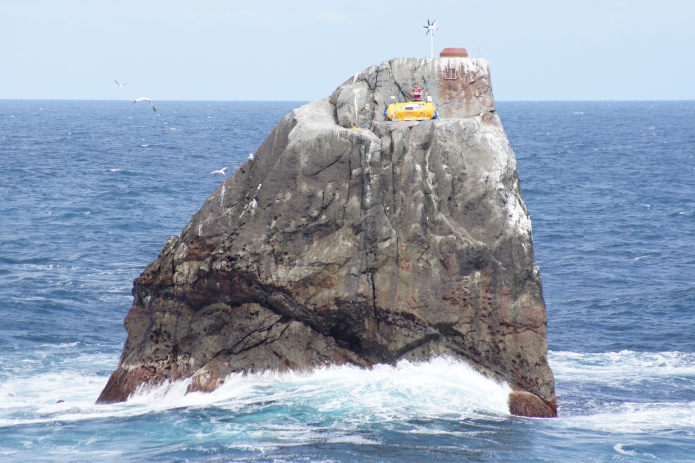 1. Where did you get the idea from?

I was made redundant in 2008 and moved to Scotland. There was no work in property, so I took a job in an outdoor clothing shop. Whilst there, and bored at the till one day, I decided I needed a challenge and started to research the possibility of sea kayaking from mainland Scotland to St. Kilda, via Skye and the Outer Hebrides. In doing that I came across a story about some Spanish sailors being ship wrecked on Rockall and making it safely to St. Kilda. That drew my attention West. I read a lot about the rock and quickly became aware of the existing group and solo occupation records. I decided then that I wanted to visit and hopefully break the records.

2. What gear did you bring with you?

I had to take all of my food and water for two months as there’s no fresh water supply on Rockall and nowhere to prepare fresh food. I also had to take a method of generating power in order that I could charge the communications equipment and electronics I took with me, so I built an Ampair wind turbine on top of Rockall, which provided more than sufficient power, and I was loaned a BGAN satellite unit by Inmarsat, via which I could blog and Tweet. In addition to these key items, I also had a laptop, from which I blogged, and which had hundreds of ebooks on for passing the time.

3. What item proved the most useful?

It was probably a combination of the laptop, BGAN unit and my satellite phone, all of which I used to get up to date weather forecasts, so I knew what weather was coming and the sea state to expect, and also, after the storm, they were critical to communicating and planning my exit strategy.

4. What was your day to day routine like for the 45 days?

In order to eat into the time I tried to slow everything I did down and take as long as possible over tasks. There was no concurrent activity out there. I’d generally tried to not get out of my sleeping bag before 0900 and would then take an average of around an hour to have breakfast and complete daily ablutions. Then, depending on the forecast, I would either read, if the weather was poor, or I would get out of the RockPod and exercise, collect samples, measure features, or generally try and enjoy being there by watching the wildlife. Lunch was around 1400, and I would eat again around 1900, after checking the forecasts online, before more reading and bedding down around 2200hrs.

The summit is properly flat, as it was blown off by the Royal Engineers for a light beacon to be fitted. Unfortunately it’s too small to live on and most of it is taken up by the light housing. A few metres below the summit is Hall’s Ledge, named after the first person recorded to have landed on Rockall. It’s generally level although not particularly flat, nor big at around 11’ by 4’ at the widest points, but it offers the best place for a shelter and is where I and the previous occupants set up camp.

There were lots of birds all the time, mostly gannets and guillemots, but also puffins, shearwaters and even a couple of lost racing pigeons and a starling! In terms of mammals, there were often two or three seals about, hunting in the shallower water around Rockall and Hasselwood Rock (about 100 metres to the North). The most spectacular sight though was the minke whales, of which there were at least three if not four or five around at any one time. It was amazing to be able to watch them hunt and blow at the surface, and I spent a lot of time just sitting and enjoying the privilege.

Physically it was just a matter of being fit and strong enough for the initial climb, the descent at the end, and hauling and lowering kit up the rock. Apart from that, I had to learn quite a few new skills relating to winching and hauling the RockPod, for which I trained with the local Fire and Rescue team instructors. Mentally, I’m pretty self-reliant anyway, and am able to entertain myself, so it was just a matter of setting enough tasks to stave off any boredom.

I had originally planned to stay for two months as the existing records were 40 days solo and 42 days as a group; I wanted to beat these records and push them out far enough that they wouldn’t be broken for a while. Two months was a good round number to aim for and fitted within the tight weather window that summer in the North Atlantic allowed. Early in the morning of day 28, I was hit by a Force 9 storm which dislodged my shelter, the RockPod, and also ripped away four of my barrels of food and equipment. This left me with around fifty days’ worth of food if I was frugal, and I then had to strike a balance with the weather forecasts, food reserves and when the charter boat was available to get me. This all came together at forty five days, which is why I left the rock then.

I had originally thought that I would be ready to go in two years and the expedition was christened ‘Rockall 2011’ as I hoped to land in the 200th anniversary year of the first recorded landing. In reality, it took five years hard work to design and build the RockPod, find a suitable boat (the one I used wasn’t even launched until 2012) and to raise the funding to pay for the boat fuel and charter. That included a reconnaissance trip and a failed attempt to land in 2013 due to bad weather.

The coastguard knew I was on the rock, and I was just on the outer limit of helicopter rescue; although it would take several hours and a refuel to get to me, and then they would have less than half an hour on site to search for me. I took with me an EPIRB, and SPOT location beacon which I set off every morning to say that I was OK, and my satellite phone also had an emergency beacon built in. In terms of living on the rock, whenever I was out of the pod I wore a climbing harness and was tethered to Rockall with a life line clipped into various anchors around the summit and Hall’s Ledge. I didn’t want to slip off!

The only time I was scared was during the storm I mentioned. I was on my own, 250 miles out in the North Atlantic, in a Force 9, in the middle of the night. I couldn’t see anything it was so dark, and I couldn’t leave the RockPod for fear of the high winds and waves. Around one in the morning, after a lot of spray and few small waves had hit the pod, a large wave came and shunted my shelter across the ledge. I didn’t know if the straps holding me down were still attached, and couldn’t check because of the weather conditions. I just had to lie there and hope that was the worst of it. The pod quickly slipped back to near its original position, but in the morning I saw that a number of the straps were slack and an anchor bolt had bent under the force of the water that hit. It was not an experience I ever want to repeat.

The RockPod is a converted water bowser like the ones you see at road works. It’s a rigid plastic capsule that would have held around 2.5 tonnes of water, so it very strong, but light too. I added an access hatch, port hole and deck vent from Lewmar in order to provide light and ventilation, and bolted fourteen 1 tonne rated lifting points to the shell so that I could tie it down to Rockall with ratchet straps. I then levelled the floor with plastic sheeting and insulated it with spray on expanding foam insulation. The only other thing I did was to screw a plywood sheet on the bottom to level out the concave base in order to assist with the initial winching up the rock at the start of the expedition. It was perhaps more an evolutionary process then direct design, but I had certain requirements that my shelter had to fulfil, and what resulted was a strong, light weight, water proof shelter that floated and could be relatively easily winched.

No, I won’t go back to try and extend my record, even if someone does beat it. I am hoping to go back to Rockall soon though, perhaps next year. The place just gets under your skin.

That’s hard to answer, there were so many highlights: the minke whales, watching an amazing sunset and knowing you were the only one seeing it, the solitude (a rare thing in the world these days), surviving the storm, speaking to passing vessels over the VHF, and then seeing my ride home coming over the horizon. All were fantastic in their own way and went together to make the expedition an amazing experience for me.