1. What countries have you surfed in?

Let’s just say I’ve been quite nomadic from an early age, going on surf trips with my parents and little sister to the Canaries and road-trips through Europe. The biggest turning point for me was a trip of a lifetime to Tahiti aged 16. I was pen-pals with a girl from Australia whose Dad was a great surfboard shaper, Nev Hyman and he invited me on the trip.  I travelled by myself from Ireland to meet up with a bunch of young, hot-shot surfer girls from Australia that I’d never met before. We stayed with a legendary character, Moana David who took us to surf Teahupoo and other spectacular reef breaks. That trip really opened my eyes to the world, pushed my surfing, made great friendships and caught the travel bug. I’ve been on the road more or less ever since. And more often than not pretty off the beaten track. After I finished my Leaving Cert at school I worked my butt off running a surf school at my local beach doing back to back surf lessons dawn till dusk and saved up enough to get to Hawaii for a winter on the North Shore when I was just 17. Worked on building up a profile and good relationships with people and sponsors and organised a lot of trips myself. I’ve had the opportunity to travel to some pretty amazing far flung places – some stand-outs being Micronesia, Galapagos Islands, Africa and more recently Cuba and Iran. 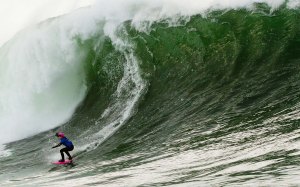 2. Do you have a signature trick?

Not really, it all depends on the wave and how you interpret it…

4. What does Ireland have to offer the surfing world?

5. What are your greatest achievements in surfing?

Probably more personal than podium. Although it was great surfing to a home crowd at the Eurosurf in Bundoran in such quality waves last year, finishing with a PB in the top 5. But for me the greatest moments have been defined by the waves I’ve ridden and the people I’ve shared those experiences with –  towing-in at Aileen’s for the first time and catching the big-wave bug, quite unexpectedly; A new year’s dawn patrol, climbing down the 700ft Cliffs of Moher for a paddle session out there; Getting to know the beauty in the beast that is Mullaghmore and being the first woman to ride these waves. As a result of some heavy sessions out there last year, I got nominated for the women’s Billabong XXL Big Wave Performance of the year, along with some very inspiring chargers like Keala Kennelly, Maya Gabeira and Mercedes Maidana. So being able to represent big wave women’s surfing in Ireland and Europe on that world stage was amazing!

6. You studied environmental science, is that a back up if the pro surfer life doesn’t work out?

I think the two belong very much together. My passion for the ocean and my surfing life have ultimately shaped who I am and have greatly influenced my relationship with the environment, so naturally I wanted to explore that more. I have a hungry mind and I like to look at the bigger picture as well as where the next wave is coming from.

7.Where was the best wave you ever surfed? Describe it?

Oh that’s such a tough question, one that I get asked a lot…it’s hard to answer because no two waves are the same, even a wave you know well and surf all the time is always changing and can be unpredictable which is the beauty of it. What makes a wave the ‘best’ is a combination of factors – who you’re sharing the experience with, the back-drop, the wind, the wildlife, the colour of the water and the shape of the reef, how the swell hits it just right and how perfectly positioned you are to take advantage of all those elements… so I can’t really answer that question!

8.How many boards do you have? What are they?

Ummm, a fair few. Hard to keep track of because they come in and out of storage depending on the conditions or are rediscovered, some big beauties, my pink tow board by Mark Maguire, some kept for sentimental reasons, others borrowed or passed on or donated…my fun little 5’6 sx model shaped by JP who has been surfing my boards for years and I’m loving them.

9.What does your name mean?

It translates from the Irish word for ‘fish’ – ‘iascaigh’ and is the name of Mum and Dad’s favourite wave!

Well, that’s a cracker of a question! I have a daily ambition to keep an open mind and open heart and to never make a decision out of a place of fear. 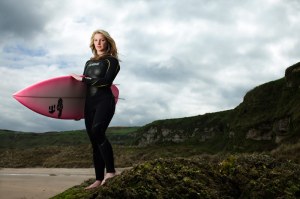 11.How do you think the women’s surfing industry is shaping up?

I think the standard of women’s surfing is exploding and there are a lot more women in the sport and pushing hard the limits of what’s possible. A lot of inspiring female role models which is great. BUT unfortunately this isn’t well reflected in the media at all (as with a lot of sports), or sponsorship with woefully inadequate funding for events including the women’s professional ‘dream tour’ (WCT) which is virtually unknown compared to the men’s and is over by the summer, mostly held in average beach breaks. This compared to a tour in 1990s that took them to world-class, heavy waves like Teahupoo, Cloudbreak in Fiji, J-Bay, and a full Triple Crown series in Hawaii. I don’t understand this lack of support, not when women are trying so hard and there is so much talent.

12.How often do you get out on the water?

Every day if I can, which can be hard in Ireland especially with the fickle climatic conditions we’ve been having lately but I also love to get out paddling or freedive, any excuse to be out there.

I like creative expression as well as scientific inquiry… I sometimes feel this great sense of urgency, that thinking in Buddhism and Native American Indian culture where you live as if it your last day or ‘every day is a good day to die’  which might sound terribly morbid but it’s not. It’s about being here now, fully present. Not putting off your hopes and dreams for some time later, when you have more time. That’s an illusion. So, really I’m not great at sitting still –  I think I’d be rubbish at golf because of my lack of patience!

14.What does it take to become a pro surfer?

Belief in yourself, confidence and good guides/mentors in life. As well as a lot of focus, and remembering why you do it in the first place, not to let it get too serious, and have fun.

16.Do you prefer cold or warm water surfing? Why?

In the depths of winter in Ireland when it’s howling another gale force 10 storm for the 6th consecutive week I would say somewhere warm for sure! But when it’s firing in Ireland there’s nowhere else I’d rather be. I don’t feel a burning desire to go somewhere colder than Ireland though!

Both. Both give you very different experiences and it’s certainly not big all the time so you need to make the most of it. Small can be beautiful too, big tends to be awe-inspiring and heart pounding though!

18.Whats the biggest wave you ever surfed?

At Mullaghmore last year. It was a solid 20-30foot, wintry day.

I’m not even sure where I’ll be or what will be happening next month let alone ten years. I think I would feel suffocated if I had a ten year plan. Goal setting can be a good thing but mapping it all out into a plan can be a bit too rigid sometimes. One thing’s for sure the biggest thing I’ve learned is how to cope with change and adapt and be flexible. The gifts often come along in the unexpected moments. I think I have more of the Alchemist in me…! 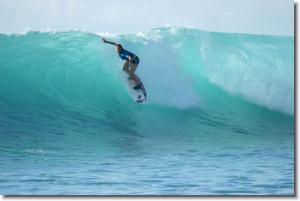 20. Where’s your favourite spot to surf?

Now that would be telling wouldn’t it?!

She is also an ambassador to an amazing organic superfood company Organic Burst.