Everyone who walks this earth has a story.

Some are routine and dull. Some will take your breath away. But the sad truth is most will never get told.

You may have heard this story before or perhaps you may have not. I am going to tell you regardless, because these five men have a story worth telling and I plan to tell the world.

Lieutenant Will Dixon , Corporal Neil Heritage, Corporal Rory Mackenzie, Lance Corporal Carl Anstey, Ed Janvrin and Alex Mackenzie step up to the stage.
All are former servicemen. Three are amputees. One walks with a permanent brace. All have seen the realities of war. All rowed 3000 miles across the Atlantic Ocean to bring about change. They rowed themselves to recovery.

Co-founder Alex Mackenzie explains why they entered the legendary Talisker Whisky Atlantic Challenge, “We wanted to raise money to support the wounded and their families and to send out a positive message that inspired those who had been injured and galvanised and also to the general public to challenge what is possible in life whether wounded or not.”

I offer you the facts bluntly and once read they are not easy to ignore.

In two years the number of British service personnel undergoing single amputations has doubled. The number needing multiple amputations in that period increased six fold. Even when servicemen escape the physical ailments, war will switch tactics and consume their minds, filling it with nightmares, flashbacks and depression – “The scars you cannot see.”

“One word which summarizes our post-conflict view of the world is perspective. There is always someone worse off than you and that is something that motivated us in the difficult days of the row,” says Mackenzie.

If you donate to a cause you want to know where your money actually goes. Battleback, funds wounded soldiers return to support. Army Recovery Capability funds the whole life-cycle of recovery from rehabilitation to professional retraining. Quick Reaction Fund supports the families with short notice funding to cater for the particular challenges that they face when their family member has been wounded. It is for the families standing behind the uniformed men. The people who the world never fails to forget. Row2Recovery has totted up £782,770.00 for these organizations to date and is still counting.

The crew is adamant about the reasons behind this challenge. They are like all rowers of oceans, an elite but modest few. They shy away from the credit that the world is attempting to push on them.

“The elite group in our view are invisible, they are the wounded and their families who go through incredible challenges every day and are so rarely in the public eye,” MacKenzie says. 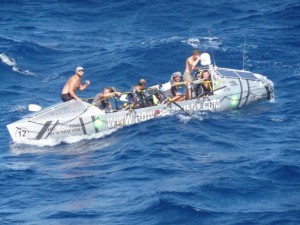 The crew embarked on this mission to suffer. They were not to be disappointed. Each day they rowed twelve hours on, twelve hours off.

Mackenzie says “Routine is critical in tackling one of the greatest challenges: psychological exhaustion. Finding the dogged determination to continue under extreme physical pain, sleep deprivation and severe weight loss can be difficult.”

The expedition was designed to push the participant to their absolute limits. The men could handle this, their boat on the other hand could not. First the watermaker gave in and then with 500 miles left to row, the rudder failed. Yet, somehow they endured, completing the 3000 mile journey in 51 days.

After fifty-one days on the water they have returned to real life, their family, their friends and their day jobs. They walk amongst us once more but beneath their facade their thoughts are stained with memories of those fifty-one days when there was nothing more important in the world than the oars they held between their hands.

McKenzie’s advice; “Think big and go for it, even when people tell you that something is not possible.”