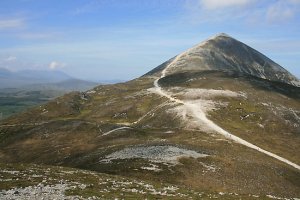 Croagh Patrick is one of Ireland’s more famous sleibthe (mountain) as it is a pilgrimage and recreational route combined. It sits eight kilometers outside the quaint town of Westport, County Mayo and its summits reaches 2,507 ft. All I have ever heard about it growing up, far, far away from it (5hrs) that it is tough, really tough. I did not train for it, but I hold a general level of fitness so on impulse I decided last week that I would attempt to scale this beast. The truth be told, it was grand. Breaking it down, there are two stages, the first is fine once you develop a rhythm. At the half way point it flattens out to meet the base of the steep climb to the summit. Here is where things get tricky, especially if you are trying to drag your mother up it after you.To add to the heartache it is buried in shale all the way to the top. At the base, you can rent sticks to aid your ascent, best one euro fifty I ever spent.

It was a pleasant sunnish day for Ireland, so naturally the mountain was packed. People of various sizes and ages littered the main route, with a constant wave of people passing you then stopping to rejuvenate, then passing again. There was the unfit, been dragged up by an eager friend or relative red-faced and bleary eyed, then the foreign tourists speaking in a foreign tongue and smiling at all who they pranced by. There were the seasoned hikers who all dolled up in their hiking gear made it all look so easy and finally there was the minority who ran up it and who I gaped after both astounded and jealous.

At a leisurely pace it takes about two hours to get up and down it. A weathered church sits on the top surrounded by a view of the sea and greenery that Ireland can be proud of. People dined there on ham and bread rolls and flasks of tea. What I love about mountains, well hills, and the people who climb them is the atmosphere that is created along the trek. The shared experience of pain and triumph breaks the ice and allows everyone on board to chat, to congratulate or to offer words of encouragement. On the descent I met a local man who had walked this route sixty-nine times this year, instantly I felt like a fool. I smiled at the man while thinking fair play to him who actually got and was living by the code I was preaching. The Irish landscape and the people who walk its green pastures are steeped in history, and there to be taken advantage of if you can just force yourself to look beyond the weather.

View all posts by orlaomuiri